What’s in a name? For Sri Lanka’s newest geckos, a political firestorm

In 2017, herpetologist Sameera Suranjan Karunarathna and his team of researchers undertook a detailed study of lizards in more than 100 locations across Sri Lanka to record the distribution of different species and study their conservation status.

What they didn’t bargain for was an ugly spat over the naming of six new species of geckos discovered as part of the study.

The issue has become so politically contentious that an ultra-nationalist politician has challenged the naming exercise in parliament, while a group of Buddhist monks is demanding police action be taken against Karunarathna, who is now the target of an online hate campaign. In the process, little attention is being paid to the discovery of the new species or the threats they face.

Cnemaspis gotaimbarai is named after another of in honor of another of Dutugamunu’s loyal warriors, Gotaimbara. The species was discovered from the forested hills of Kokagala in Ampara district, a region of immense archaeological and historical significance. Image courtesy of Majintha Madawala.

The new research paper, published in the journal Vertebrate Zoology, records the discovery of six new endemic geckos of the genus Cnemaspis from little-known areas in Sri Lanka. It was expected to be welcome news as Sri Lanka petitions for the protection of its endemic lizards at a global wildlife trade summit taking place in Geneva. But instead of celebrating the latest additions to the island’s remarkable list of unique reptiles, the researchers are now dealing with massive hostility.

Two of the new geckos, Cnemaspis nandimithrai and C. gotaimbarai, are named after Nandimithra and Gotaimbara, two legendary fighters from the Ten Giant Warriors who served the ancient Sinhala king Dutugamunu, the island’s ruler from 161 to 137 B.C.E.

Cnemaspis nandimithrai is named in honor of Nandimithra, a warrior who served King Dutugamunu more than 2,000 years ago. Legend has it that he moved boulders to build a monastery for Buddhist monks. Image courtesy of Nimantha Abeyrathne.

“The paper sought to highlight Sri Lanka as a top global hotspot for herpetofauna diversity and a local center of high endemism,” Karunarathna said. “The six additions we have made seek to underpin the fact that ours is an island of reptilian diversity and high endemism.”

But some in the country’s political establishment have sought to seize on the issue to burnish their nationalist credentials ahead of elections later this year, by accusing Karunarathna and his team of dishonoring the historical heroes by naming geckos after them. Wimal Weerawansa, a member of parliament, called the naming decision disgraceful, while an ultra-conservative religious group has complained to the police chief in writing.

Sri Lanka’s scientific community has rallied behind the researchers, pointing out that naming a new species after someone is a common practice meant to honor the latter. In the case of the six new gecko species, they say, naming them after national heroes is an attempt to perpetuate the memory of the latter and educate the public, and not an effort to undermine their legacy.

“It is a well-established practice and there is nothing new in naming species after national heroes,” Mendis Wickramasinghe, a herpetologist who has helped describe more than a hundred new species, told Mongabay. “I have named a snake, Aspidura ravanai, to honor King Ravana and a shrub frog, Pseudophilautus puranappu, in the memory of a national hero, Veera Puran Appu. There is no question of attempting to insult their memory.”

Environment lawyer and naturalist Jagath Gunawardane called the naming of a species after an individual the ultimate honor. In 2013, a shrub frog was named in his honor, Pseudophilautus jagathgunawardanai.

In an attempt to quell the controversy, Anusha Gokula Fernando, the director of the department of cultural affairs, issued a statement reiterating that the practice of naming new species in honor of prominent personalities is established tradition.

Karunarathna had previously named another species of gecko, Cnemaspis godagedarai, after Godagedara Rate Adikaram, a hero of the Uwa-Wellassa Rebellion. In all, he has described eight new gecko and four lizard species, and is in the process of describing a dozen more.

The new Cnesmaspis species — all “point endemic,” or restricted to a very small geographic range — were recorded from cool, wet, spacious granite caves found within rock outcrops in forests largely undisturbed by human activity. These habitats are scattered in geographically isolated forested hills in the historical Uwa-Wellassa region and the central districts of Kandy and Ratnapura.

The geckos, small or medium in size, aren’t just restricted in range but also have limited dispersal capabilities and niche specialization, Karunarathna told Mongabay. These factors, along with the relatively low abundance of the species, should qualify them for a conservation status of critically endangered, the researchers say. They also call for further study of Sri Lanka’s isolated forests, especially in the dry and intermediate zones, for both conservation and in-depth research to inform specific management activities. 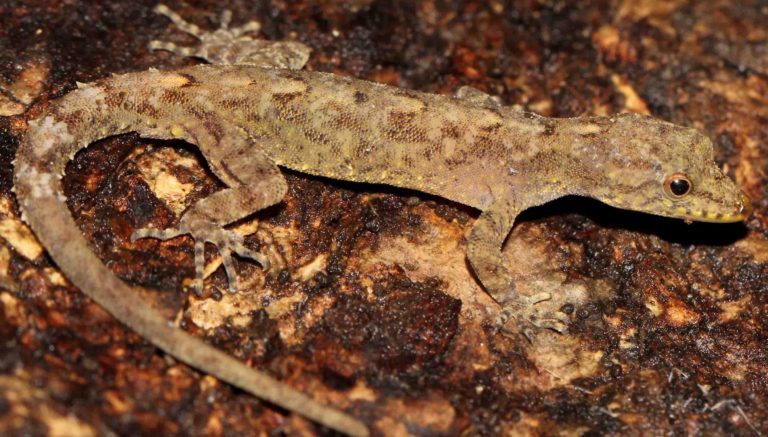 Kivulegedara Rate Rala played a significant role in the Uwa-Wellassa Rebellion of 1817-1818, for which the researchers chose to honor him by naming Cnemaspis kivulegedarai after him. Image courtesy of Sameera Suranjan Karunarathna.

The new discoveries bring Sri Lanka’s Cnemaspis species, known as day geckos because they’re active in the daytime, to 32. The total number of known gecko species in the tropical island is 54, 44 of which are found nowhere else on Earth. Most are restricted to the wet zone; 20 species are considered critically endangered, nine endangered, five vulnerable and four are data deficient.

In April, a study highlighted how rare lizards found only in Sri Lanka are winding up in Europe as part of the illegal trade in exotic wildlife. The publication of the study by the wildlife trade monitoring NGO TRAFFIC came ahead of the 18th Conference of the Parties to the Convention on International Trade in Endangered Species of Wild Fauna and Flora (CITES). Sri Lanka has put forward a proposal at the summit, currently underway in Geneva, to protect several endemic lizard species from international trade, although they don’t include any day geckos.

“Other stresses include unplanned infrastructure development and granite mining, forest fires and logging that increase habitat degradation,” he said. “It’s best to fight against these causes than the nomenclature of geckos.” 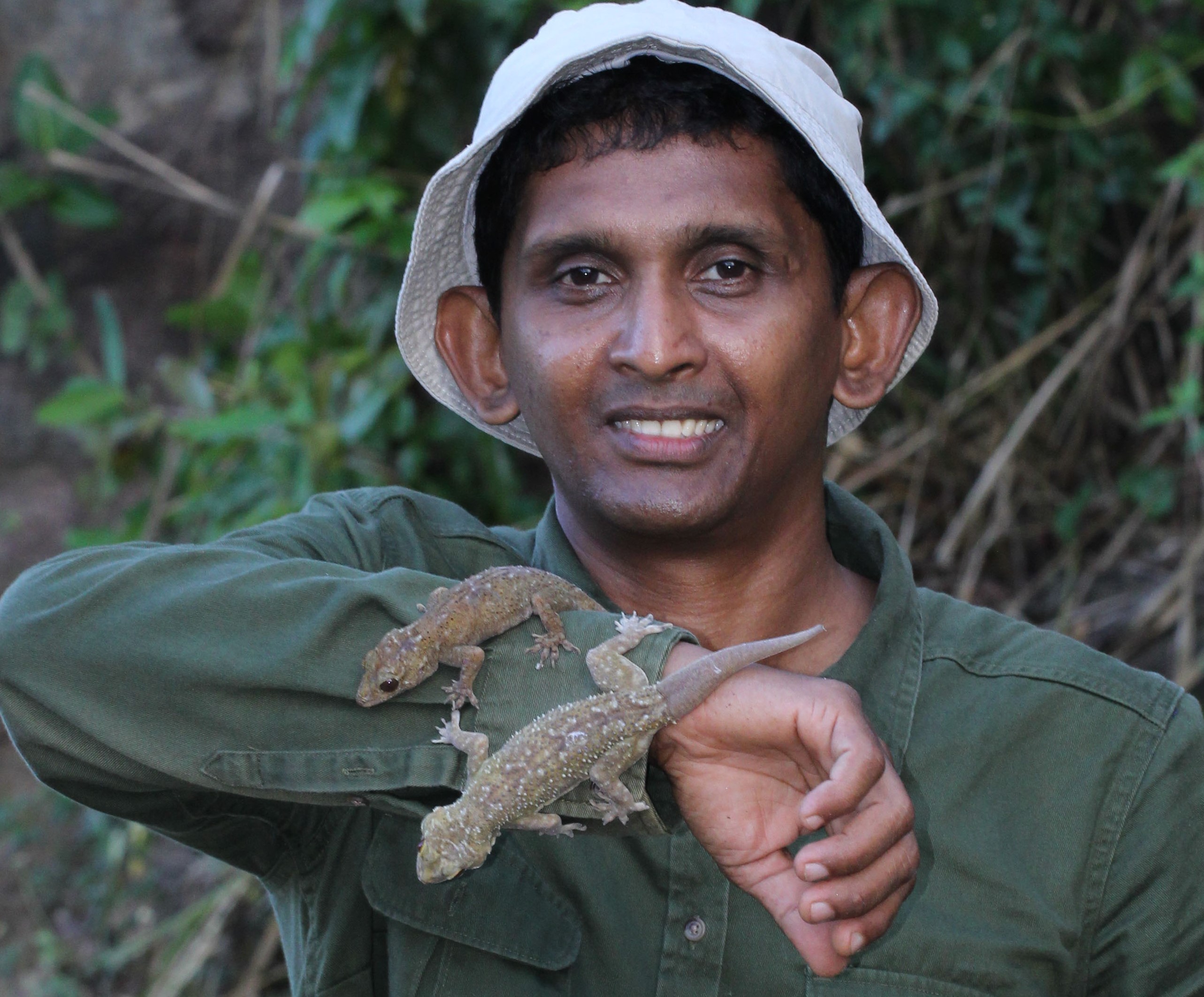 Herpetologist Sameera Suranjan Karunarathna has found himself at the center of a political firestorm after naming six new gecko species after historical figures. Fellow scientists say it’s the ultimate honor to name a species to perpetuate the memory of an individual. Image courtesy of Madhava Botejue.