By Myriam François, Guardian, UK
The diversity of the national team raises hopes – as does a win in court for an olive farmer who has given help to migrants

Liberté, egalité, Mbappé! After France’s World Cup victory on Sunday, the French slogan was rewritten to celebrate a winning goal by a 19-year-old player from the Paris suburbs who is donating his World Cup fee to charity because, he says, it is such an honour to play for his national team.

Much has been made in the wake of the moment of national pride that 19 of France’s squad of 23 players are migrants or the children of migrants. Or the fact that the reflex of Muslim players Paul Pogba and Djibril Sidibé was to prostrate themselves in prayer at their win. How could a country so riddled with prejudice towards minorities get behind a team that reflects all its own contradictions back at it?

A startling recent report by the French national commission on human rights (CNCDH) stated that Muslims “remain among the least accepted minorities, with the rejection often extending from Islam, to the entirety of its practitioners”. French Muslims may be leading their nation to the biggest prize in world sport, yet 44% of French people believe Islam is a threat to French identity. Even prayers are a problem for 30% of French people who think they are “not compatible with French society”. Not a single minority achieves over 80% “tolerance” in France today. Fraternité, anyone?

In France today, a practising Muslim man is four times less likely to get a job interview than his Catholic counterpart. According to the study, Muslims in France face even worse discrimination than African-Americans do in the United States.

Last year, for the first time ever, Front National (FN) garnered more than 20% of votes in a presidential election, with the party’s leader, Marine Le Pen, setting a new record for the number of FN voters of 7.6 million; 35% of those who voted backed Front National in the second round.

The illusions many of us held over the 1998 national celebration of “black, blanc, beur” (black, white, Arab) multiculturalism have long been replaced with a deep cynicism over France’s commitment to a national identity that embraces all French men and women on an equal platform. Or the reality that, 20 years on, football is still one of the few avenues for material and professional success for France’s working-class men from the banlieues. The fraternity created by football can’t mask the growing cleavages over the very soul of our country.

Yet, away from sport, one man’s battle against the state may offer a glimmer of hope. In February, the government brought in some of its toughest laws related to asylum, doubling the time for which undocumented migrants can be detained (now 90 days), and making the illegal crossing of borders an offence punishable by one year in jail, plus fines. Charities referred to the new laws as “an unquestionable break with France’s tradition of asylum”. 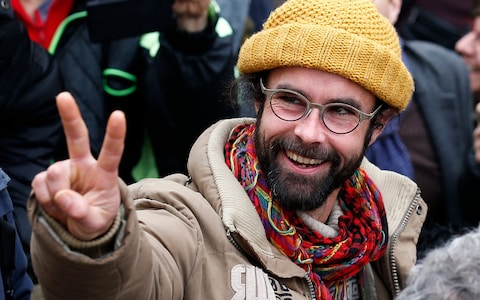 Yet this month, a young farmer by the name of Cédric Herrou took the French state to court for failing to live up to its core values of liberté, egalité and fraternité. And he won. While lacking the global hysteria that surrounds the World Cup, this landmark decision is certain to have far-reaching implications.

Herrou, an olive farmer from the Roya valley, which stretches between France and Italy, first came to public attention last year when he was fined euros 3,000 (£2,700) for assisting dozens of migrants. He has argued that he and his friends are being persecuted for a “crime of solidarity”.

To his detractors, he’s endangering the nation in a country where immigration is now consistently framed in terms of national security and terrorism. To his supporters, he embodies everything France claims to stand for – freedom (of movement for all), equality of all peoples, and fraternity regardless of class, creed or colour. And last Friday, France’s constitutional court ruled that the country’s core “principle of fraternity” protected Herrou from prosecution. It said: “The concept of fraternity confers the freedom to help others, for humanitarian purposes, without consideration for the legality of their stay on national territory.” This decision is hugely significant in a Europe that has grown increasingly hostile to migrants.

When I met some of Herrou’s friends last year, they explained that the assistance they provide did not start out with any grand ideological intent. As “mountain people”, as one man described them, they abide by a simple, but critical age-old code that has ensured their survival. It states that if you find someone lost in the mountains, you provide food, shelter and help them along their way. For the people of the Roya valley, they told me, this has always been the rule. And one which must apply to everyone, no questions asked.

Herrou’s case is a historic moment – one man’s campaign has forced the government itself to question its values. And it should force us all to confront the dangerous trap of only recognising as French – and by implication of accepting as fully human – those people of colour who undertake extraordinary acts. Those who save children from falling from buildings, or those who win global sporting tournaments.

Sunday was an important symbolic victory, and the message was clear: this is us, black, Muslim, French, African, “banlieusard”, and we are the best of France. Yet in the struggle over Europe’s very soul – the ideals we claim to want to foster and advance through it – Herrou has shown us it is still possible to recognise how far we may have strayed. Let’s take inspiration from the picture the national team paint for us, but not forget it takes long, hard and often overlooked battles to make that image more than a distraction.

(Dr Myriam François is a research associate at the Centre of Islamic Studies, Soas University of London.)