The announcement of Gotabaya Rajapaksa as the Presidential candidate of the Sri Lanka Podujana Peramuna (SLPP) on August 11 seems to signal a change of fortunes for former Militant and ex-MP Vinayagamoorthy Muralitharan better known by the once feared Nom de Guerre Karuna Amman. With the defeat of the Rajapaksa regime in 2015, Karuna had retreated to the shadows only to appear at the recently held SLPP party convention.

As the former Defence Secretary’s name was announced as the Presidential hopeful of the party, Karuna the former LTTE militant turned politician was a prominent presence at the event and was seen publicly hobnobbing with a number of nationalist politicians and Rajapaksa acolytes, such as Udaya Gammanpila and Wimal Weerawasansa. The fact that the man had been dogged for years with allegations of carrying out heinous attacks on civilians and government forces during the war-torn years appeared to matter little.

Becoming a powerful figure in the Rajapaksa government after defecting from the LTTE in 2004, Karuna was appointed as the Deputy Minister of National Integration in March 2009, perhaps a reward for joining hands with the government to defeat the LTTE. He was also anointed as the Vice President of the Sri Lanka Freedom Party (SLFP) less than a month later. Karuna allegedly enjoyed protection and privileges under the Rajapaksa government.

For example, when, in 2007, Karuna was arrested in the United Kingdom for identity fraud for carrying an apparently genuine Sri Lankan diplomatic passport issued under a false name, Karuna told the Isleworth Crown Court in West London that he had received the false diplomatic passport from the Sri Lankan Government. He said Defence Secretary Gotabaya Rajapaksa, the now SLPP presidential hopeful, had arranged the documents for him. So, when Gotabaya Rajapaksa’s candidacy was confirmed, Karuna was quick to voice his support and mark his re-entry to Sri Lankan politics.

Calling a press conference in Batticaloa recently under the banner of his newly formed Tamil United Freedom Party (TUFP) Karuna Amman claimed that the Tamil’s should choose a candidate who would benefit them. “If the Tamil community voted for Former Army General Sarath Fonseka then why can’t they vote for Gotabaya?” he suggested, adding that the Tamil people must choose wisely and vote for Gotabaya Rajapaksa.

But the Gotabaya candidacy has not only brought hope for Karuna but for Sivanesakumar Chandrakanthan aka Pillaiyan as well. Known once as Karuna’s protege, the ex LTTE militant had gone on to become the Chief Minister of the Eastern Province under the Rajapaksa regime. But with the yahapalana government deciding to reinvestigate the assassination of Tamil National Alliance (TNA) MP Joseph Parapajasingham which took place on Christman day in 2005, Pillaiyan was arrested under suspicion on October 11, 2015, by the Criminal Investigations Department (CID). Today he continues to be in detention but perhaps not for long as Joint Opposition MP Susantha Punchi Nilame meeting Karuna in Batticaloa recently pledged that Pillyena would be released. Karuna also faced legal troubles when he was arrested in 2016 for misusing a state vehicle.

As the ex-militants now gear up for the upcoming Presidential elections, the more serious allegations against them remain, albeit forgotten.

A 2013 Human Rights Watch report said that LTTE forces under Karuna’s command were directly involved in some of the worst crimes of Sri Lanka’s 26-year-long armed conflict. Colonel Karuna, during his lengthy stint with the LTTE, was known as its chief arms procurer and was the LTTE’s second in command before his rift with LTTE leader Velupillai Prabhakaran. Over the years Karuna and his supporters have faced a number of accusations for masterminding dastardly crimes such as the Aranthalawa Bhikku massacre, the assassination of 600 policemen in Ampara and attacking the most revered Dalada Maligawa.

In the case of the policemen, in 1990, around 600 police officers who had surrendered to LTTE forces, many of whom were said to be under Karuna’s control, were bound, gagged, beaten and then executed. In another case, in July 1990, Karuna’s forces stopped a convoy of Muslims travelling in the Eastern Batticaloa district and executed about 75 people, including women and children.

Turning into a pro-government militia much later, their atrocities only increased, often perpetrated against Tamils and Muslims. According to Sreeram Chaulia, the author of International Organizations and Civilian Protection, the Karuna faction continued to unleash LTTE like brutality in the East after its split with the LTTE. He also notes that after becoming the Rajapaksa government ally in 2004 much of the brutality was done with the blessings of the state. “It offered TMVP political and legal cover to carry on abuses of civilians, especially children without being bothered by the state media and intelligence arms,” he notes in his book. 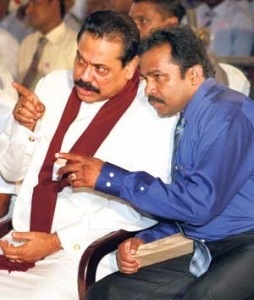 Both Karuna and his once right hand man Pillaiyan have been accused of recruiting child soldiers for their cause. Documenting this, Human Rights Watch, in a 2004 report “Living in Fear: Child Soldiers and the Tamil Tigers in Sri Lanka”, noted that Karuna’s forces played a prominent role, routinely visiting Tamil homes to tell parents to provide a child for “the movement.” The LTTE harassed and threatened families that resisted, and boys and girls were abducted from their homes at night or while walking to school.

Despite Pillaiyan’s denials of fresh child conscriptions after becoming Chief Minister during the last stages of the war, Chaulia noted that forcible recruitment continued widely in the East. “A new set of material pressures on the UNICEF to downplay child conscription emerged from within the government,” he added.

The Amnesty International Annual Report 2010, Sri Lanka noted that the “Armed groups allied with the government such as the TMVP carried out enforced disappearances and hostage-taking for ransom, unlawful killings, and recruitment of child soldiers, including from camps housing internally displaced people. The International crisis group report of April 16, 2009 noted that reports of extortion and theft by the TMVP was widespread in the Eastern province.

The UN Working Group on Enforced and Involuntary Disappearances found that, other than government forces, the Karuna group were responsible for many of the disappearances between November 2006 and November 2007. It also noted the impunity enjoyed by the pro-government armed group which perpetrated enforced disappearances.

One of the most horrific cases reported was perhaps the abduction of several Tamil Rehabilitation Organisation (TRO) employees by the TMVP from Welikande in January 2006. As eminent journalist D.B.S Jeyaraj later revealed, Premini Thanushkody, the lone female of those abducted, was gang-raped and later killed by Karuna and Pillaiyan associates.

While the accusations against them are sky-high, the ex-militants have continued to evade justice. Appearing before the Lessons Learnt and Reconciliation Commission, Karuna himself called the killing of 600 unarmed policemen in Ampara a war crime but denied he was responsible as he was in the North when the killings took place. The admission, however, did not elicit any action from the Rajapaksa government. Instead, in 2014, Udaya Gammanpila went so far as to call Karuna ‘A war hero’.

“He has not committed any crime but are war heroes who had fought shoulder to shoulder with our war heroes,” he was quoted as saying. With the now possible return of Colonel Karuna in sight questions have also been raised on the continued immunity the ex-militants have been awarded even under the Yahapalana government as the atrocities committed continues to be ignored. As one political commentator noted, “Karuna Amman even appears to be above God”.