There is, finally, some scrutiny of Britain’s sordid relationship with one of the most abhorrent dictatorships on Earth. That it has taken the murder of a journalist – rather than, say, Saudi Arabia’s remorseless war in Yemen, now the world’s worst humanitarian crisis – is a travesty. Do not expect this moment to last. The British establishment and the Saudi tyranny are intertwined: the ties between our ruling elites and a regime that beheads dissidents, exports terror and slaughters Yemeni children are too lucrative to break.

Take our political elite. When he was prime minister, Tony Blair piled pressure on the attorney general to end a massive corruption scandal involving a Saudi arms deal. Since the Saudi-led onslaught on Yemen began, the British government has licensed £4.7bn of arms exports. British military advisers have even worked in Saudi war rooms. Germany has now haltedarms exports to the Saudi regime; but even if more western bombs are dropped on school buses, there is no chance the Tory government will follow the German lead.

The Saudi regime spends hundreds of thousands on British MPs – mostly Tory, but some Labour: from foreign trips to gifts. On one such trip, in April this year, Labour’s Paul Williams cooed that his “previous notions have been blown out of the water”; that he had “seen a modern, progressive Saudi Arabia that has totally changed my view of this country”. His Saudi funders must have been delighted: the rate of beheadings has doubled under the crown prince, Mohammed bin Salman; women’s rights activists and the country’s most prominent dissident have been arrested; and thousands have been butchered by the Saudis in Yemen. Shipping over gullible British parliamentarians on stage-managed trips to project a false image of reform is a good investment. Williams protests that he can see “the absolutely atrocious things the regime does”, but stresses the “economic and social reforms taking place”, unable to accept that he was used. 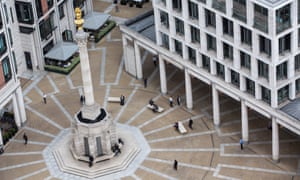 ‘Britain’s financial regulatory body has changed its rules in the interests of a foreign dictatorship.’ London Stock Exchange. Photograph: Bloomberg via Getty Images

Kwasi Kwarteng is a Tory MP who has been on Saudi-bankrolled trips worthnearly £10,000. He tells me that it is “babyish” and “the stupid approach of the left” (like “no-platforming at universities”) not to accept trips paid for by dictatorships in order to “engage”. When asked whether he would accept a trip bankrolled by North Korea’s dictatorship, he simply protests he’s not interested in the country. Why does he think the regime pays for such trips? “They want people to see their country, for propaganda purposes, of course!” he admits, before hanging up. He is right, of course: such trips are integral to the Saudi propaganda offensive.

There are the economic ties. Earlier this year, our then foreign secretary, Boris Johnson, lauded an estimated £65bn worth of Saudi investmentover the next decade, in sectors ranging from finance to education to healthcare to defence. The Financial Conduct Authority has changed its rules to allow foreign state-owned companies to be listed on the London Stock Exchange’s “premium category”. Insiders agree that the rules were altered to favour the Saudi-owned Aramco oil company. Britain’s financial regulatory body has changed its rules in the interests of a foreign dictatorship. As David Wearing highlights in his excellent new book, AngloArabia, Britain’s colossal current account deficit – the product of trashing manufacturing in favour of finance – is being financed by Gulf petrodollars, including from Saudi Arabia.

Saudi influence reaches deep into civil society. Universities have been lavished with money by the Saudi royal family, including tens of millions on Oxford University institutions such as the Ashmolean Museum and the Said Business School. While New York’s museums are now rejecting Saudi money, not so here: even after Jamal Khashoggi’s disappearance, the Natural History Museum refused to cancel an event hosted for the Saudi embassy, citing it as an “important source of external funding”.

And consider the so-called British free press. The Independent – my former employer – has teamed up with a media group close to the Saudi royal family to launch websites across the Middle East and Pakistan. Disturbingly, a Saudi businessman with links to the regime has even bought a 30% stake in the news site. The Saudis have bought adverts promoting the Bin Salman reform agenda in newspapers, the Guardian included. Con Coughlin, the Telegraph’s defence correspondent, attended the National History Museum bash, posting the next day an article accompanied by the tweet: “Was Jamal Khashoggi a liberal or a Muslim Brotherhood lackey who reviled the west?” He has written fawning interviews with Bin Salman, describing him as a “human dynamo” under whose rule “Saudi Arabia’s future prospects clearly know no bounds”.

Saudi Arabia is a tyranny that threatens all of us. It was central to the rise of the Taliban, al-Qaida and Isis. It subjects women to monstrous oppression, maintains the death penalty for gay people and “witches”, bans all political parties and free media, and uses British and US weapons to butcher civilians in Yemen. Britain’s alliance with the House of Saud exposes our ruling elite’s talk of “human rights” abroad as a crock of lies. Foreign regimes are arranged into a hierarchy of villains; but the order is not decided on the basis of how villainous they are, rather how hostile they are deemed to be to western interests. There are many reasons why our country’s crumbling social order has lost any legitimacy. This blood-soaked pact is as striking as any.

• Owen Jones is a Guardian columnist