America has a problem that afflicts both her foreign policy and domestic affairs: cowardice.

A nation of wusses. That’s us.

That’s not how we see ourselves, of course. Whatever our flaws — impetuousness, naivete, our sense of exceptionalism — few Americans count pusillanimity among them. For conservatives bravery as a national trait is a given; if anything, progressives wish we’d walk it back a bit, toning down the testosterone in favor of a little humility.

From the outside, however, we look like a nation happy to inflict all manner of mayhem on people all over the world, yet unwilling to put our own precious skins in the game.

Drones are the ultimate manifestation of America’s newfound risk aversion. After more than 12 years of remote-controlled aerial killer robot warfare, the statistics are undeniable: Unmanned aerial vehicles are an ridiculously sloppy assassination method that kills anywhere from 28 to 49 times more innocent civilians than targeted alleged terrorists. With the myth of accuracy thoroughly debunked, drones remain popular with the public for one reason: They don’t expose American soldiers to return fire.

What we see as an advantage, however, sparks contempt among foreigners that our adversaries in this war for hearts and minds exploit in their recruitment and fundraising efforts. You see it in the faces of the Afghans and Pakistanis I have interviewed: If the United States military had any honor, they say, it would come and face our warriors man to man, on the battlefield, rather than pushing a button thousands of miles away. Every “terrorist” we blow up makes us look worse.

Moreover, cowardice is unproductive on a psychological level.

During the early years of the American occupation of Iraq, British forces (who patrolled the region around Basra) suffered lower casualty rates in the zones under their control than their American counterparts.

One reason, according to military psychologists, is that British troops presented themselves as more willing to expose themselves to the Iraqi public and less afraid of being hurt or killed. Whereas U.S. forces wore wrap-around sunglasses and set up checkpoints behind sandbags and blast walls, sometimes identifying themselves only by shooting at approaching cars — which caused confused Iraqis to floor the gas, prompting U.S. forces to kill them — the Brits acted more relaxed, like traffic agents standing right out on the road.

Americans covered themselves with Kevlar and automatic rifles; the British wore formfitting uniforms, eschewed helmets and satisfied themselves with sidearms. Sunglasses were banned. The American approach seemed safer, but the opposite was true. It’s easier to shoot at something — the Americans looked like fascist robots — than someone.

For a country that used to pride itself on a certain stoicism, the United States has become a land of whiny little boys and girls.

Oh, how we cried after 9/11. Three thousand dead! Those “Wounded Warrior” TV ads asking for donations to support Afghanistan and Iraq war veterans — excuse me, but why am I spending 54 percent of my federal tax dollars on defense if I also have to donate to a sketchy charity? — use the same melancholy tone and weepy delivery as Sally Struthers’ classic “save the children” messages. Obviously it sucks to lose your arms and legs, but let’s grow a pair. Fewer than 7,000 Americans got killed invading two countries where they had no business being in the first place.

Let’s put those numbers into proper perspective, shall we? The Soviet Union lost 20 million people fighting the Nazis (who invaded them, by the way). France lost 11 percent of its population during World War I — the equivalent for us would be 34 million Americans. But the Russians or French don’t bitch and moan as much as us.

Speaking of which, Americans have a lot of balls calling Frenchman “surrender monkeys” considering that nearly twice as many French soldiers were killed in the 1940 Battle of France over six weeks as the United States lost in Vietnam over the course of a decade. Meanwhile, we’re still whining about the 58,000 we lost in — no, invading — Vietnam. 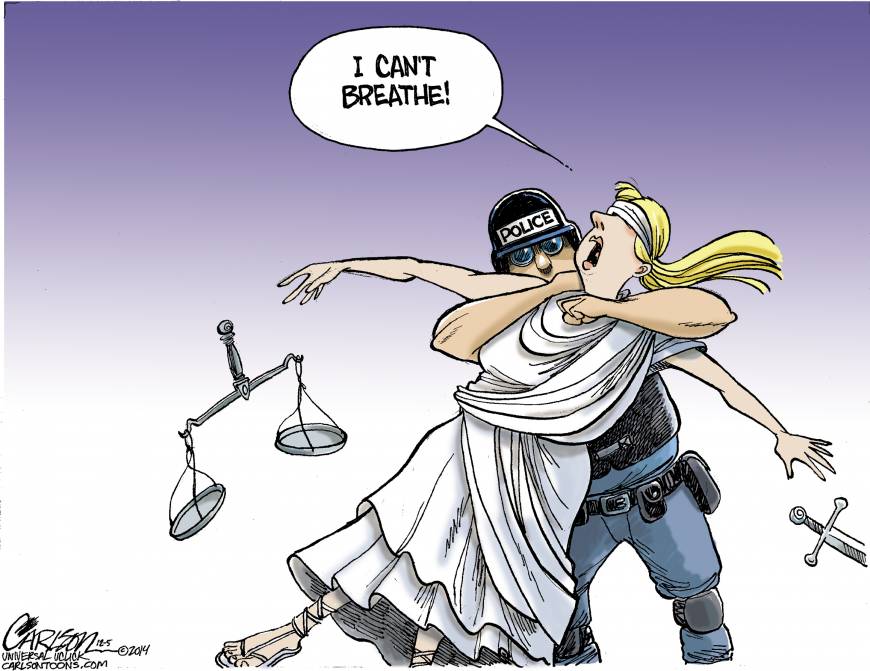 In recent weeks, we have been treated to grand jury testimony in the shootings of two black men, Michael Brown in Ferguson, Missouri, and Eric Garner in Staten Island, New York.

Both killer cops are bruisers — big, muscular guys. Most of all, they are cops. Cops have partners. They have the backing of the state. They carry tasers. They have nightsticks. They go to the police academy, where they train long hours in the art of subduing human beings. And as we well know, they have access to military-style hardware and defensive gear.

As these two sniveling wimps tell the tales, however, they were in desperate fear of their lives. From two guys, both now dead, who were morbidly obese.

Not to mention unarmed.

Ferguson police officer Darren Wilson (193 cm, 95 kg) claimed that Brown (193 cm, 132 kg) terrorized him. “I felt like a five-year-old holding onto Hulk Hogan,” he testified. Brown “had the most intense aggressive face,” he said. “The only way I can describe it, it looks like a demon, that’s how angry he looked.”

The NYPD’s Daniel Pantaleo told a grand jury that, after he got his arm around Garner, he was terrified that the two of them would crash through the thick glass window of a storefront they were leaning against.

Both grand juries declined to indict the cops.

Sure, these were the testimonies of two heavily lawyered defendants following a script that has gotten countless white policeman off the hook for killing unarmed black men in the past. But you still have to ask: aren’t those big “brave” policemen ashamed of themselves? I’m not sure which is worse, pretending to be afraid of an unarmed civilian — in the New York case, the guy wasn’t even resisting arrest — or the possibility that they actually were scared.

In the U.S. in recent years, however, bravery has been in short supply — even in the face of very little danger at all.