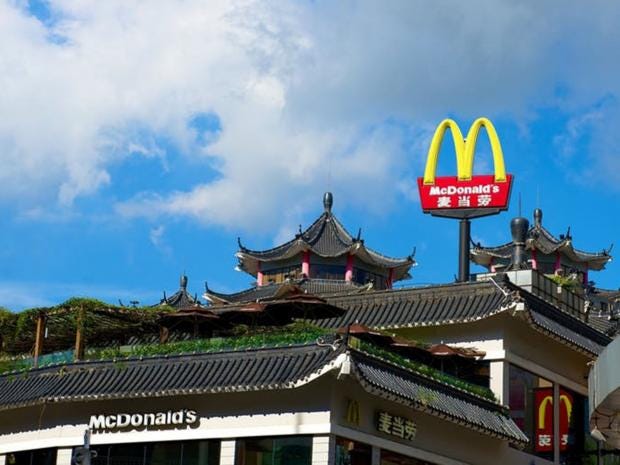 McDonalds plans to open 1,000 stores in China over the next five years

New statistics have revealed the extent of the world’s obesity epidemic, with obesity rising tenfold in children over the past four decades. In addition to this, another 213 million children were classed as overweight. Yet obesity figures in the US and the UK reached a plateau for the first time.

As a millennial, junk food – namely crisps, burgers, chips, pizza and fizzy drinks – was an integral part of my childhood. Walking to the shops after school and ordering some chips was a daily habit. We all know that it’s not difficult to find junk food for a cheap price in the UK. Indeed, many poorer families depend on it precisely because of its price point.

But some of these products are only now making their way to developing countries – and this “new” mode of cheap, fatty, filling cuisine is having a terrible effect. The worst increases in obesity occurred in China, India, Polynesia and Micronesia – in the case of the latter, half of their young population is either overweight or obese. The number of underweight children has decreased, but this development has been quickly met with an epidemic at the other end of the scale.

Most people in the UK are aware that the country has undergone an obesity “boom” in the past decade. Figures indicate that we are stabilising the problem, but one in five children of reception age are still classed as obese or overweight. The figures increase to 26 per cent of children in the most deprived areas, compared to 12 per cent in the most affluent – showing that poverty and obesity still go hand in hand.

So it’s no surprise that some of the most deprived countries are now seeing a rise in obesity, and we bear some responsibility for outsourcing this problem.

Obesity is on the rise

Egypt was recently found to be in the top 20 most obese countries in the world, with an estimated 35 per cent of adults classed as obese and 22 million Egyptians living in poverty. In Egypt’s heart lies Cairo, and with a buzzing capital city come with long working hours and often low wages.

Samoa, the “paradise island” in the Pacific, has seen a dramatic increase in obesity, with figures showing a 95 per cent increase since they began importing Western food and tinned goods. This has led in turn to sharp increase in the diagnoses of diabetes and sleep apnoea.

Developing countries seem to now be subjected to the hands of power-chains in the same manner as the US and the UK. KFC in 2016 planned to open 600 restaurants across China and McDonalds stating a long-term goal of 1,000 stores over the next five years.

One in four children aged seven or above will be obese in China by 2030. And although China has seen a drop in poverty since the late 1900s, millions still live below the poverty line.

Many of these countries either currently are or once were colonised by the West, which may have led to a widespread ideology that a better life exists here. For the millions in poverty, we are perceived as wealthy beyond their wildest dreams. It’s plausible that in some way by adopting the norms of the West, these countries feel closer to that dream and to the culture and society they idolise.

Having been a tourist in some of these countries, including Egypt, it became obvious to me that there was a growing obsession with the West. I could barely walk down the street without being approached about being a Brit; I had countless conversations with Egyptians dreaming of the UK, their very own idea of a “paradise island”, and discussions of how much better life must be.

The trend appears to expand far beyond the food industry extending to fashion TV and music in a push for modernisation over traditionalism. Recent times have seen a spread of this culture, a prime example of this is mainstream artists such as One Direction, Ed Sheeran and The Vamps all cracking markets in developing countries. Next month India will see Ed Sheeran make a stop, Jakarta will similarly be another one to experience this. Last year British band The Vamps made a highly-anticipated stop in India. It is more apparent than ever that global chart-toppers are appealing to markets far beyond the West.

TV shows such as Game of Thrones, Breaking Bad and The Big Band Theory have all taken China by a storm following the success of Friends in the early 1990s, giving users the opportunity to watch American favourites with Chinese subtitles for free.

This obsession with Western-affinity taken high-street brands such as Zara, H&M and New Look and landed them with stores across the developing world including Egypt, Morocco and Indonesia, there is a want to be associated with and embraced by the West’s modernisation on a broad scale.

Many of the countries struggling with obesity have embraced Western food culture with open arms because they have a desire to mirror the environment as a whole, a dream of a wealthy and prosperous society and an easier life for their people and perhaps adopting this food culture makes them feel a step closer to that, even if it means giving up what they know so well: great real food.

With such admiration of this food culture, big chains see these territories as a gold mine.
The West’s “boom” of obesity is now transcending across the oceans as developing countries start trading in real produce for convenience food – and it’s clearly having a detrimental effect on their health.