There are crooks everywhere you look now, the situation is desperate,’ journalist wrote shortly before her death 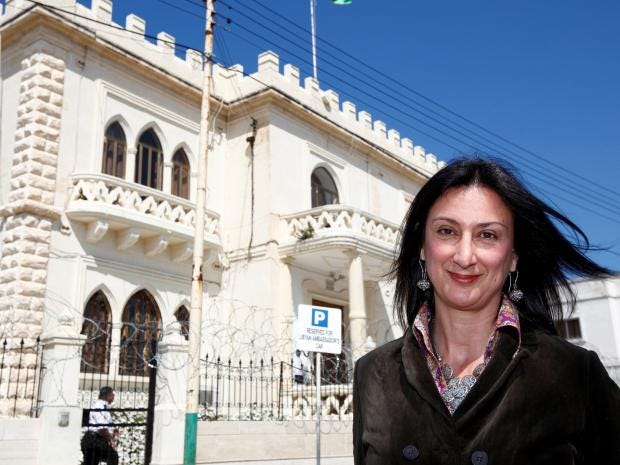 Daphne Caruana Galizia, whose investigative work focused on corruption, was killed when a car bomb blew her vehicle to pieces.

A politician said her death marked the “collapse of the rule of law” in Malta, the smallest in the European Union.

Tributes to Galizia poured in on Monday evening, as thousands of Maltese gathered in the streets for a candlelight vigil to the reporter.

Galizia is believed to have just published the last post on her widely read blog, Running Commentary, just before leaving her house Mosta, a town outside the capital Valletta.

“There are crooks everywhere you look now,” she had written, “the situation is desperate.”

Soon after driving away in her Peugeot 108, Galizia’s vehicle exploded with such force it was sent flying over a wall and into a field.

Galizia reported death threats against her to the police just over two weeks ago, according to local media.

Her in-depth reporting made her many enemies, including the Prime Minister, opposition politicians and members of the judiciary.

She was described as a “one-woman Wikileaks” by Politico and her blog sometimes achieved a larger readership than all the other newspapers in Malta combined.

The death was described as a “political murder” by opposition leader Adrian Delia.

He said: “What happened today is not an ordinary killing. It is a consequence of the total collapse of the rule of law which has been going on for the past four years.

“We will not accept an investigation by the Commissioner of Police, the Army commander or the duty magistrate, all of whom were at the heart of criticism by Caruana Galizia.”

Her husband, Peter Galizia, has also requested magistrate Scerri Herrera is be excluded from the investigation because of previous spats with the dead journalist.

Prime Minister Joseph Muscat, while acknowledging Galizia as one of his “harshest critics on a political and personal level”, denounced the “barbaric attack” as “unacceptable”.

He said the violence was a “barbaric attack on press freedom”.

Mr Muscat was a significant target of Galizia’s reporting.  After analysing the leaked Panama Papers documents, she accused his wife of owning a suspicious offshore of a company in the Central American country.

Both Mr Muscat and his wife denied the accusations and sued Galizia earlier this year.  Shortly after her death, Mr Muscat announced FBI experts would be helping the investigation.

The murder sent shockwaves throughout Europe and politicians and journalists sent their condolences.

European Parliament President, Antonio Tajani, described the murder as “brutal” and said: “Tragic example of journalist who sacrificed her life to seek out the truth. She won’t be forgotten.”